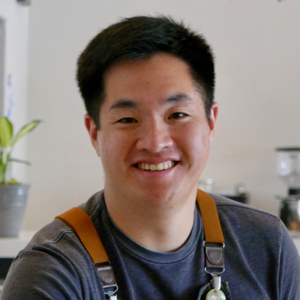 Among connoisseurs and historians of coffee, there is general consensus that three major waves have impacted the way we consume our coffee today.

Michael Shieh, director of coffee at Living Room Coffee Craft in Campbell, California, explains these waves to his staff of baristas. The first wave, starting in the late nineteenth century, was concerned with the exponential consumption of coffee, putting coffee in every kitchen. The second wave, mid-twentieth century, was all about specialty coffee like espresso drinks. The third wave, and where we are currently, is focused on origin of coffee and artisan production. But for Michael, knowing coffee’s past is more than understanding its context in the present, it’s about looking ahead to its future. The fourth wave is coming and Michael is destined to be a part of it.

Michael, a native of San Jose, California, began future tripping about coffee over 8 years ago when he first dreamed of opening his own cafe. He had just graduated from UC Davis with a degree in applied mathematics and moved to Los Angeles to work at 85°C, a bakery where he fell in love with coffee, tea and food. He enjoyed hand-crafting the coffee with a manual espresso machine and quickly became a manager, traveling to new locations for this bakery to educate and train staff members. As their number of locations increased, 85°C shifted its operating procedures away from manual preparation to automation. Michael’s aversion to frozen dough and push-button coffee inspired him to return to school to learn more about food and coffee.

In 2015, he graduated culinary school from Cordon Bleu in San Francisco and set off on a journey to find his future in the food and coffee industry. He traveled east, stopping in Orlando to work at Disney World as a line cook. He then turned northward to Boston to work at America’s Test Kitchen. This is where he first visualized opening a non-profit cafe where he could turn his culinary talents into social impact. He decided to return home to San Jose to begin working on his dream with a focus on coffee.

Michael was hired by Din Tai Fung to run their kitchen and tea program in their newest location at Westfield Valley Fair. The opening was a huge success, drawing large crowds and long wait lines. But coffee beckoned, and Michael joined Barefoot Coffee in the quaint town of Campbell, California, to work as a barista and store manager. He also started teaching cooking classes at Sur La Table, and even started his own catering company as a side hustle. Then he met Janet Tang, a classically trained pastry chef who shared the same vision and they set about turning this into something real. In the summer of 2018, Living Room Coffee Craft began to take form.

“Our vision for Living Room was to create a safe space for people to gather and connect with each other,” he explains. The interior certainly reflects this. It’s spacious, modern and cozy.

“Food and drink bring people together,” he continues. “Having a family style meal where people can sit down and eat and talk and get to know each other is what I’ve always liked about cafes.”

Michael, the culinary sojourner, seems comfortable now, with his feet planted at Living Room Coffee Craft ready to make a mark upon the history of coffee craft. Yet, he eyes the future once again.

“We can only open the doors and invite the community in and have faith that this will evolve exactly where it needs to.”

If Michael catches his next dream, the fourth wave of coffee will be inked into history with Living Room Coffee Craft marked as an active participant and a catalyst of change.